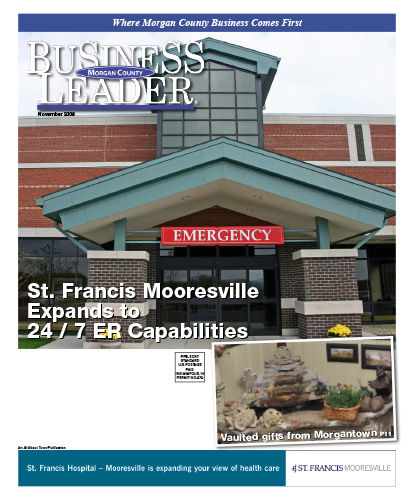 Back in 2000, when St. Francis first purchased the thriving campus of Kendrick Hospital, the corporation committed to expanding facilities into a full-service 24/7 hospital with ER capabilities. Eight years later–occasionally distinguished by major construction and parking lot detours as the infrastructure took shape–St. Francis Mooresville officially launched the expanded facilities October 1.

“The community wanted ER services for northern Morgan County,” said Jared Stark, now in his fourth month as executive director of St. Francis Mooresville. “An ER facility, as you can imagine, is not something that can go up quickly. This facility is the final result of the past eight years of effort and a $42 million investment from St. Francis Hospital to move in that direction.”

According to Stark, St. Francis’ urgent care service, called PromptMed, has been increasing in volume for the past several years, at least partly due to the increase in population in the immediate area since the late 1990s. “Clearly, the need is there, we’re committed to providing the resources to meet that need.”