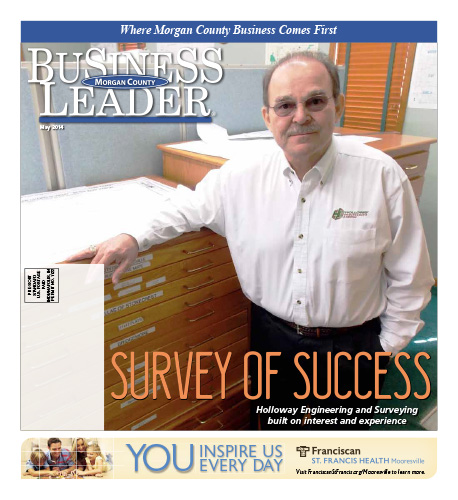 Holloway Engineering and Surveying built on interest and experience

As the years go by you just keep making decisions that seem right at the time. You are working hard, marrying, rearing your children and just trying to get everything done. It’s not until much later you see the result of all those decisions in retrospect and then it becomes clear.

At least that is the case for Ross Holloway and how he built Holloway Engineering and Surveying into a thriving family business in Mooresville. Holloway has always preferred to be outdoors, so as a freshman in high school when he had the opportunity to work outdoors for pocket money, he took it. “In the mid-sixties, I started working for the Morgan County
Surveyor’s office on Saturdays, during school breaks, and the summer for $1 an hour. I was a rod man or chain man and by the time I was a senior, I was making $1.25 an hour.”

At that time surveyors were using techniques and tools that had not changed in hundreds of years; steel tapes, transits and plumb bobs by hand traversing ravines, meadows and creeks a little bit at a time. He says it was backbreaking work.

He went off to Marion College studying pre-engineering for a civil engineering degree. As he says, it just wasn’t working so he left and jumped into life. He went to work for the state highway commission, first as an inspector and later moving into a project supervisor role. It wasn’t long before he started classes at Purdue University at night. He received an Associate’s degree in civil engineering and then a Bachelor’s degree in construction technology.

During the time he was working and experiencing a broad brushstroke of experience, he studied for and obtained his surveying license and started working on the weekends as an independent surveyor, mainly single property surveying with some commercial properties sprinkled in the mix.

Holloway obtained an engineering license in 1994 and added that to the weekend work. The Martinsville resident met “a wonderful woman” with four children who lived in Avon. When he and Pat decided to make a life together with her sons John, Kelly, Chris and Paul, they settled on building a home mid-way between Avon and Martinsville in Mooresville.

Mooresville has been home ever since so in 2002 when some of Holloway’s larger clients told him they wanted to use him more, like 8 am to 5 pm, five days a week, he left the security of a job working for someone else and opened Holloway Associates. “I promised to make the mortgage payment and that was about it,” Holloway said.