Taylor Made for Mooresville 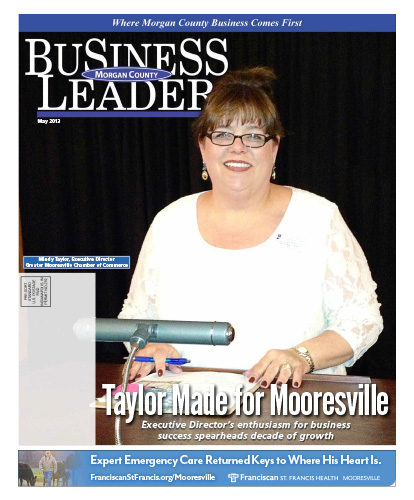 Mindy Taylor connected with the Greater Mooresville Chamber of Commerce nine years ago, first as administrator in 2004, then as Executive Director in 2008. It’s safe to say that, in the minds of most members, Mindy is synonymous with everything positive the Chamber stands for. This is due in no small part to the growth of the Chamber from roughly 25 active members when she started to the +200 active members today.

In 2004, the Chamber occupied office space next to the Mooresville Times. Mindy recalls her time there fondly.”I loved that building, but it was very old. The floor slanted and we were always afraid it would fall in.” She remembers trying to find new office chairs without roller wheels. Then one morning in 2007, “We came in and the ceiling had collapsed.” The city was finishing the conversion of the First United Methodist Church into the Mooresville Government Center at 4 E. Harrison Street. Following the ceiling mishap, the Chamber moved into new office space, from where it operates to this day.

In 2004, the Chamber held its monthly meetings in the Mooresville School Administration Building, and averaged about 30 attendees
a month. By late 2007, they met at Jones Crossing Banquet Center and drew 50-70 regular members. “The Banquet Center was a new facility, and we had outgrown other options. The Jones family stepped up and offered it to us. They’ve continued to make it
available for every luncheon and event.”

Mindy describes the Chamber as “the networking hub of Mooresville. Within us, you can connect to Rotary Club, Kiwanis, BNI, the Lion’s Club, Networking Business Women, most local not-for-profits, and more, we don’t compete with any of them. We don’t even compete with other chambers. We’re there to teach people how to network and connect to other local people. If we succeed there, then all the networking groups succeed.”
Mindy credits this network as the reason for the Chamber’s growth. “We want every organization to succeed so Mooresville will thrive. I think when a business comes to realize this, they became more involved. At the same time, our members branched out and joined other organizations. That was always the message. My role was, and is, to get that message out to the community on a consistent basis.”

Mindy grew up in Decatur Township. Upon graduating Indianapolis Baptist High School, Mindy moved to Honduras for a year. “I had gone for a couple of weeks with a church group when I was 15, and loved it. So after graduating, I went back and assisted the teachers in a one-room K-12 school. My visa was due to expire, so I came back home and never made it back to Honduras.

Mindy re-connected with Rob, a family friend who became her husband shortly after. “He’d just completed five years of military service, and I had just returned from my own trip.” Mindy and Rob started a family, and Mindy resumed employment ten years later.

She earned her realtor’s license in 2000 and joined Century 21 Abba and Associates in Mooresville. The family moved to Mooresville later that year. “I started fund-raising for the Morgan County Division of Metropolitan Indianapolis Board of Realtors (MIBOR). I assisted on their annual golf outing, and then started the casino boat trip which is an annual fundraising…