The Grass Was Greener 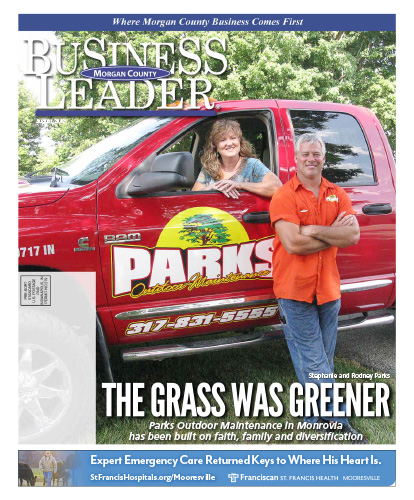 Parks Outdoor Maintenance in Monrovia has been built on faith, family and diversification.

With a surname of Parks, it would seem that lawn care and outdoor maintenance would be a given occupation. It wasn’t quite that simple for Rodney Parks, but it was definitely what was meant to be.

Rodney Parks went to ITT Technical Institute and subsequently got a job in robotics at Eli Lilly. After a few years, his wife, Stephanie, became pregnant with their first child. They really wanted her to be able to stay at home with the new baby, so Rodney started doing what he did as a teen to raise extra money – he started mowing lawns on the side.
Over five years, as the side job grew, so did his family responsibilities with another child and a new house. The couple realized something had to go. Despite the security of the 9-5 job, a drought across the state and all the responsibility at home, it was the job at Lilly that went. Friends and peers thought he was crazy, Stephanie was behind him and they felt the Lord was leading them in a different direction – a path out on their own.
It felt good to Rodney to work outside and see results. Stephanie did some mowing and flower planting, the books and paperwork. Rodney started responding to requests from
customers about different services like lawn fertilizing, irrigation system installation and repair, landscape design and installation, even bush hogging empty lots. He hired part-time workers who eventually became full-time employees.
Parks Outdoor Maintenance now employs 15 full-time employees and up to 40 seasonal workers. They kept growing out of their buildings and moved four times. They now own a
four acre lot with a 6,000 square foot office and a 5,000 square foot garage along with a fleet of vehicles and equipment…
Download the full August 2012 Edition here.