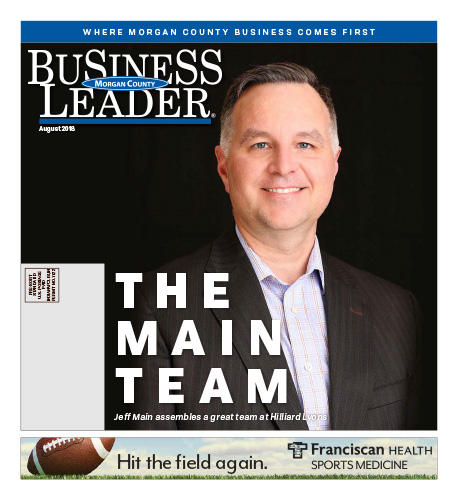 When Martinsville native Jeff Main left for college, economics was his major. He was interested in economics, but his primary objective in selecting DePauw University was both more focused, and broader. “My intention in college was to learn to learn,” Main said. “I tried to develop a broad-based knowledge and understanding of business, but then learn how to apply a variety of skills.”

His first job was as a bank examiner for the Indiana Department of Financial Institutions. After three years, it was a personal connection with fellow church member, Charlie Horrell, that changed his course. Horrell asked Main to join him in opening an office of Hilliard Lyons in Martinsville. “Charlie was in business in the Bloomington office and saw a need and opportunity in Martinsville,” Main said. “He became my mentor and senior partner in the business.”

Main says that for the first part of his career it wasn’t his position to think organizationally. “But it informed my beliefs,” Main said. “I learned from other talented people and I learned to trust the things they emphasized. Because of them I developed the confidence to put my own thoughts into practice.”

The heart of the services the Hilliard Lyons teams in Bloomington and Martinsville provide is helping families and businesses save, plan, invest, and manage their money and assets.

For individuals and families, Main and his team work toward goals such as securing lasting assets for retirement, savings for college educations, and transitioning wealth from one generation to another.

For businesses and their owners, his team manages corporate assets and benefits plans such as retirement programs. They also assist non-profit organizations, including churches and endowed charities, in managing assets and portfolios.

Building a team in Martinsville

When Main and Horrell opened the Martinsville office twenty-six years ago, Main said his focus was on establishing the office. “I think, mistakenly, I felt that it was my job to come in and know as much as possible about the subject matter.” He says he quickly learned that while that is important, and you must be competent, knowing everything isn’t the end of this business. He says it is how you apply knowledge to help others that is critical both for the clients and to build a sustainable business.

To do that, Main says advice from sales and motivation expert, Bob Dunwoody, has served him well. Dunwoody told him: Ask and listen is greater than know and tell.

“What became our focus and built our business was our ability to ask the right questions,” Main said, “and then listen carefully to the answers we got.” Those answers drove decisions that make clients feel their advisor shares their values, cares about them, and exceeds their service expectations in an honest and trustworthy manner.

Those standards of service are the basis for the culture of the organization. “If I have an employee that I have to worry about any of those things,” Main said, “then that person shouldn’t be a team member.”

Since the first days, Main says, they have looked for people whose work ethic, personal-ity, and character are a fit. “I can teach most people the skills they need to work here. I am…