THE POTENTIAL IN CHANGE 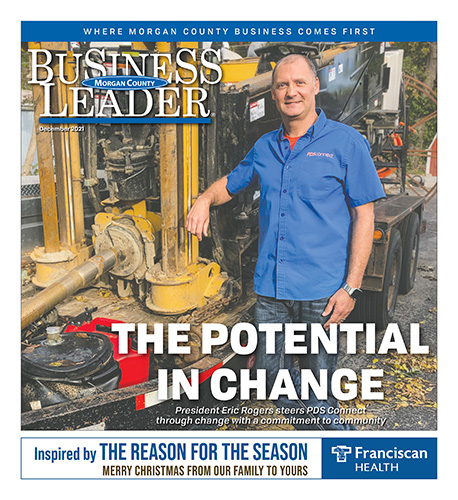 Change happens, whether we want it or not. Change is business as usual at PDS Connect. “I’m in technology,” PDS Connect President Eric Rogers said. “I know about change.” Rogers’s professional life has been built on it. He has stayed on the cutting edge of internet connectivity and networking, especially wireless since he was a junior high student in Mooresville. Rogers says his goal has always been to solve technology problems for people and businesses in his community. It still is.

PDS Connect officially started as a side hustle when the millennium was still in single digits. He was the project manager for IU West Hospital in Avon when it was built. His primary responsibility was to develop the technology capabilities and wirelessly connect the network there. While working on the hospital, Rogers had been providing internet access to people in Morgan County for a few years. He was doing what some said was impossible. By the time the hospital was finished, Rogers was getting more phone calls for internet connections in Morgan County than he was for his day job. With the assurance he could return to his job if it did not work, Rogers made PDS Connect his full-time job, his full-time business. And has not looked back.

Year over year since the beginning PDS Connect has grown. To facilitate greater expansion, Rogers says the profits are put back into the company and infrastructure. In October 2019 the company moved into its current location at 104 W. Main St., Mooresville. The building originated as the post office, then became the police department. “The building just fit us,” Rogers said. “There is more parking and more office space, so multiple people did not have to share offices. The old 911 call center became the PDS Connect network operations center.” The company has recently purchased the adjacent lot and has begun construction for expanded parking space for trucks and equipment.

While there has been much change, the underlying mission of the company has remained the same. Rogers said, “People still want to have access to the internet.” Now customers add that they want fast, reliable access, too. In addition to supplying initial access, PDS Connect is regarded an alternative to other national carriers, which has seen them expand into new areas with both fiber and wireless service options. The company serves Morgan County and all the adjacent counties.

Another area that has expanded is the consulting work PDS Connect does for other businesses, libraries, schools, municipalities, and other national carriers. Internet service outages don’t mean that a business must shut down when they have a backup service provided by PDS Connect. This is important for businesses and for critical infrastructure such as fire and police departments and 911 call centers.