THERE’S NO PLACE LIKE HOME TO BUILD BETTER COMMUNITY 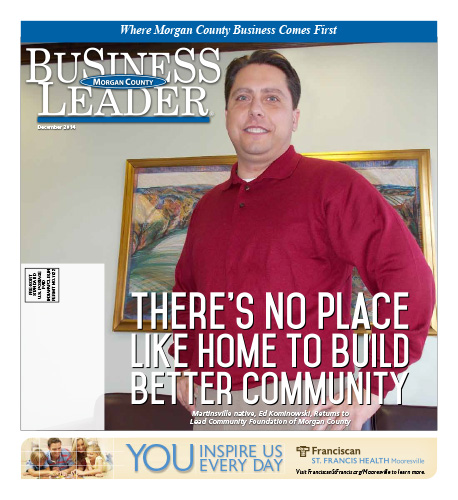 The word has already gotten out that Ed Kominowski is back in Morgan County. The Martinsville native has been away for 10 years generating fundraising success for universities and colleges in Florida. This after beginning his career working on capital campaigns and pursuing regional gifts for the Indiana University Foundation.

While he loved the challenges of learning all about the areas he supported; business, education, arts and engineering; the resources available for fundraisers were extensive. Kominowski said, “There were lists of alumni, large staffs and great systems already in place when you walk in the door. You have resources behind you that you don’t find anywhere.”

Working as an intermediary between alumnus and the universities, Kominowski says he started to see HOW people go through education. When Florida converted nine of 18 junior colleges into state colleges, he moved to one of the nine, Florida SouthWestern State College, formerly known as Edison Junior College. He said, “A state college is different. We are working with people who are achieving associates degrees and technical degrees or with students that transfer to four-year schools. Their allegiance is different.”

Rather than contacting alumni for support, Kominowski turned his focus to the community. He says he found that overall; communities want to support education in their backyards and believe it is good for citizens, taxes and therefore, the whole community.

In his work with community based fundraising, he said, “I really found that ultimately education is important, the great equalizer. But I came to realize that there were tremendous dynamics against many in the community to just get to the front door of higher education. There were so many people being left behind.” Reflecting on his life growing up in Martinsville, Kominowski says he was fortunate to have had good parents who valued education, challenged him educationally, ethically and morally, provided opportunities and support and encouragement. “I thought that was normal, but now I know it’s not. I’m an outlier. It would be nice if everyone got the same fair shake that I got.”

“There are so many factors at play,” he said, “hunger, a home environment that does not value education, poverty. With so many socio-economic hardships, is there a
chance for these folks to envision anything higher than a high school degree? As a part of families without a vision of higher education and no history of a bachelor’s
degree, first generation college students are challenged.”

Kominowski said, “The vast majority of my career has been working with the top 10 percent of society. I welcome their success, but for the rest, the 80 or 90 percent, what do they have?” Kominowski isn’t looking at the 80 to 90 percent of the population as potential donors, but as people finding the means to access the great equalizer, education. He explained what is called the “Tyranny of the Moment” from Bridges Out of Poverty: Strategies for Professionals and Communities.

“Tyranny of the Moment” describes what those people who live at or near the poverty level face each morning. He says, “I have the luxury of knowing my lights are not going to be turned off. These people do not. They live on the cusp of one small financial situation that will collapse everything.” They are juggling it all with fear from moment
to moment; figuring out how to pay for housing, food, unexpected medical or car expenses, boots and mittens for the children or how to keep the heat or lights turned on.

Kominowski says it is a good thing, a beginning, if the Tyranny of the Moment is reduced, one thing removed from their plates so they don’t have to live with the constant struggle to survive. But then he immediately ponders, “Is it sustainable?”

With a grin, Kominowski said, “Everyone wants to be their own boss, run their own shop.” Then the grin turns serious and he explains what compelled him to return. He wanted “to come back and really be engaged as a leader in the community; to take on a leadership role and be more active.”

Kominowski was never completely detached from Morgan County, or the Community Foundation. He worked with Tom Zoss early in his career and stayed in touch through the years. Assets under management at the Foundation more than doubled during Zoss’s tenure. Kominowski credits Zoss with doing the “heavy lifting” to build a strong Foundation.

Building on the base established by Zoss, and in the life cycle of a community foundation, it is now time to move the Community Foundation of Morgan County into a new chapter. Kominowski says it is time to begin new conversations and ask big questions.

“As we have gotten more mobile,” Kominowski said, “individual liberties have frayed the lines of what a community is. We have to ask, as a community in Morgan County, at what level do we all get invested in the needs of the community beyond taxes and infrastructure?

“There are people, because of no choice of themselves, that could use a hand up and if we can’t level the playing ground, there is no ladder for them to use. The more opportunities we can provide helps. But with about 60 percent of students on the nearly-free or reduced lunch program in Morgan County, what happens to these citizens
when school is out of session?”

He asks, “How do we start moving the needle and define real impact in the community? What are we facing, what are the immediate…