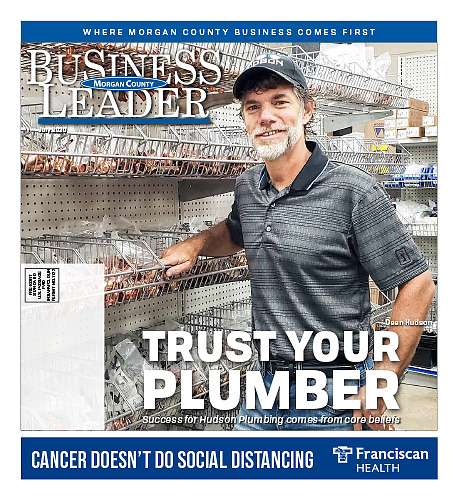 Before he finished his studies at Eminence High School, Hudson got a job at the gas station/country store pumping gas and manning the hardware department. He had dreams of one day owning his own business. He says he knew college wasn’t for him. In fact, he was eager to get out of school and get to life.

“I will always be grateful to the store owner who told me I needed a career and he was willing to teach me one,” Hudson said. “He taught me plumbing and when it came time to take the licensing test, he insisted I take the contractor’s test, not the journeyman’s test.” At the time he was one of the youngest, if not the youngest Hoosier to obtain a plumbing contractor’s license. That is how Hudson took up plumbing as a career.

Owning a plumbing business requires a contractor’s license and he had his former employer to thank for insisting that be the test Hudson took. Three years after getting his license, when he was 23 years old, he was running his own plumbing business out of his garage. Over five years he grew the business and hired three employees.

One day the store owner walked up the driveway with a proposal. Hudson was asked if he would be interested in buying the store and warehouse behind it. He agreed, moved into the warehouse and rented out the retail space in the front. The timing was good because Hudson Plumbing was running out of space in the garage.

Then, in 2009, the economy crashed. “We almost went belly up,” Hudson said. “We didn’t do any service work. We were busy with new construction. Builders were my only clients and when they went out of business, my business suffered.