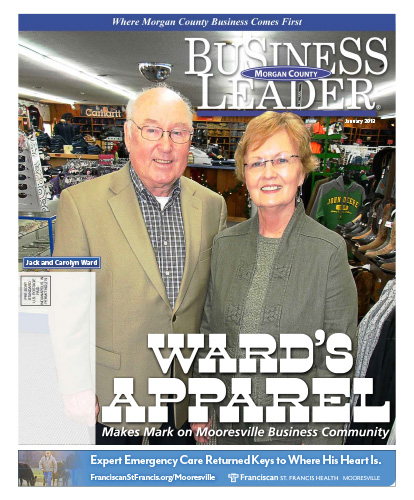 Independent business is tough business. Operating an independent retail clothing store – in today’s era of big-box retailers and plentiful online vendors – is even tougher still. But that’s exactly what Jack and Carolyn Ward, owners of Ward’s Apparel in Mooresville, have done for the past 41 years. The store is a Mooresville institution, well-known in the area and throughout the state as “Indiana’s Largest Jean and Fashion Store.”

A Diverse but Purposeful Past

Jack and Carolyn have been partners in life for the past 50 years, and partners in business for nearly as long. Though their backgrounds are diverse, Jack has retailing in his early background, working at a retail clothing store in Tennessee when the couple first met. The couple first met on a blind date, attending a basketball game during their first date. “Dad knew it was a blind date, but mom didn’t,” said Jacqui Abney, the couple’s daughter. Jack and Carolyn only dated for 6 months before getting married. After the wedding, the couple had the unique opportunity to work for the FBI in the fingerprinting unit in Washington, D.C. Later, and back in Tennessee, the couple looked at starting
a food business, but as Jack was quick to point out, this idea didn’t work out. Jack moved into a role with the Ford Motor Company, where he worked for 5 years, followed by a brief sales position.

Then, the opportunity came that changed the course of the family for good. In Indiana, one of Jack’s cousins had a small clothing business in Muncie for sale. Jack felt this was the opportunity he’d been waiting for; Carolyn, in nursing school at the time, wasn’t so sure. “I told him this is your baby,” said Carolyn. “I didn’t want anything to do with it.” Jack, in true entrepreneurial fashion, moved forward with the purchase anyway. Then, the couple began to search for a location to open their new business. After a brief search, they decided on Mooresville. “We felt Mooresville had the most to offer,” said Jack. On March 26th, 1972, the doors to Ward’s Apparel opened for the first time, at 10 West Main Street in Mooresville. Jack and Carolyn recall the early days very clearly. “The first Saturday we were open, we only did $35 in sales,” said Jack. “The first Monday we were open, I only sold one ladies top for $2.” Carolyn, now out of nursing school, worked full-time while Jack ran the business. “We lived off of Carolyn’s income and we put everything else back into the business,” recalls Jack. While the beginnings may have been slow and difficult, it wouldn’t be long before the business really began to grow.

In 1974, just two years after opening, the Ward’s purchased the building at 11 East Main Street, present day home of Zydeco’s, and began to remodel the building for their new location. At this point, Carolyn left her nursing career to work in the business full-time. The young family lived in an apartment above the store and was more determined than ever to make the business succeed…