WHEN IT’S MORE THAN A JOB 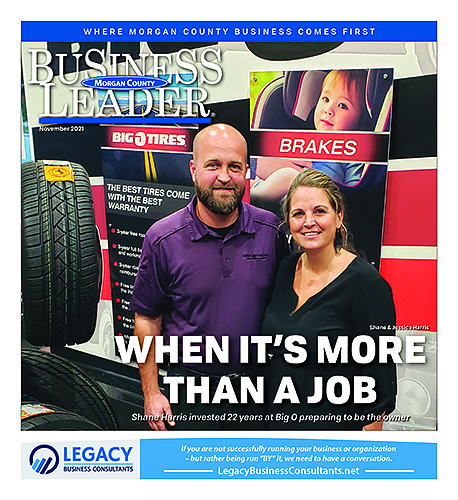 Graduating from Monrovia High School, Shane Harris had no solid plan.  He describes himself as a gearhead since his youth so working in the automotive industry and designing cars sounded like a promising idea. “At the time I had no idea it was called engineering,” he said. Instead of college, Shane took a series of jobs in the industry, selling parts, detailing cars. He worked on his own cars for years, detailing them so he always had a cool car around town. His favorite car was his 1988 maroon Camaro that his son Jaden has right now. “That car’s older than he is,” Shane said.

It all changed when he was working on a 4-wheel drive truck project. He damaged a couple of the tires he had purchased at the local Big O Tires store on State Road 67 in Mooresville. He took them in and met Dave Doyle, the owner. Doyle replaced the tires and made an impression on Shane. “I liked everything about him and the way he ran his business,” Shane said. “Within about six months, I started working at Big O.”

He spent day one sweeping out cars in the oil change building, then he was moved into changing tires. As time went on, he went through the units one at a time, mechanic, alignment tech, sales, then management.

Over the 22 years he has been at the Mooresville Big O, Shane and his wife, Jessica, also a Monrovia High School graduate, grew a family that includes their three children: Jaden, now 20; Jaxon, now 18; and Delaney, who is 15.

Even though he found success in his work and enjoys the daily variety and customer interactions, he says the Big O life wasn’t that easy. “There were 65-hour weeks and I missed out on kids’ sporting events and other family gatherings.” However, he is quick to add that there were way more
good days than bad.

Also, over the 22 years, a plan took shape for him. “I moved from position to position on purpose,” he said. “I knew I wanted to own a shop of my own. I believed Big O would be a great fit for me.” Jessica had gone to dental school to become a dental assistant. But when they started their family, she wanted to stay home with their first baby. So, she started a daycare out of their home. Recently, she has taken that dental assistant’s job. During those years at home, Jessica said she knew he had this vision of owning a shop. “I believed him because when he sets his mind to something, it’s not over until it’s completed.”

When Shane became the general manager, he made Doyle aware of his desire and hope that someday Doyle would sell the store to him.