WHERE THE NEED IS GREAT 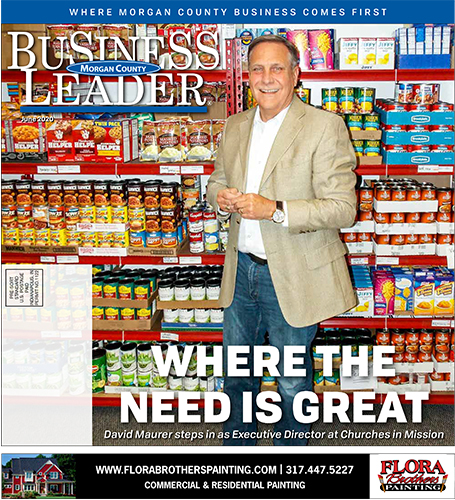 Six months ago, David Maurer stepped into the role of Executive Director at Churches in Mission and it has been a nonstop flurry of activity for him ever since.
The planning that goes into serving 700 to 750 Morgan County families over the Christmas season had long been finished and by his start date, November 5, 2019, plans were being carried out: food collections, toy drives, events with the municipal and sports organizations and the distribution of collected food and clothing. “This is a massive annual undertaking,” Maurer said. “I stepped in with both legs running next to Susan Haynes and didn’t break my stride at all. I was blown away by the community involvement.”

When the year turned to 2020, the pace settled a bit, but Maurer and his wife were both very ill, and there were rumblings that something was happening. He says he heard some talk and when people start paying attention to something, he pays attention, too. That something was not an escalating flu season but what has developed into the coronavirus pandemic. He said, “It was on my mind but we generally see the healthiest members of families come into the Mission and that wasn’t changing.”

Living on the edge of the Johnson/Morgan County line for the last twenty years, Maurer feels he has the best of both worlds. His address is in Johnson County, but his mail comes through Morgan County. After graduating from Franklin College in 1984, Maurer went into the insurance industry, where he built a career over the next 28 years. He and his wife, Jennifer, expanded their family with two children, Abigail and Jonathan, later adding a granddaughter, Phoebe. Then, as with so many industries, the culture and company shifted. That shifted him into an unexpected retirement.

Not ready to retire and having been involved in community outreach programs through his church, he began consulting, mostly with not-for-profit organizations. Over the next six or seven years, Maurer began finding that he was having an impact.

When leadership was changing at Churches in Mission, he was encouraged to apply. “There was a need for a unique skill set,” Maurer said. “The organization had such a uniqueness about it. I thought this was a perfect position to transition into where I could fill a niche working with the underserved, which is my passion.”