With an Eye on the Prize 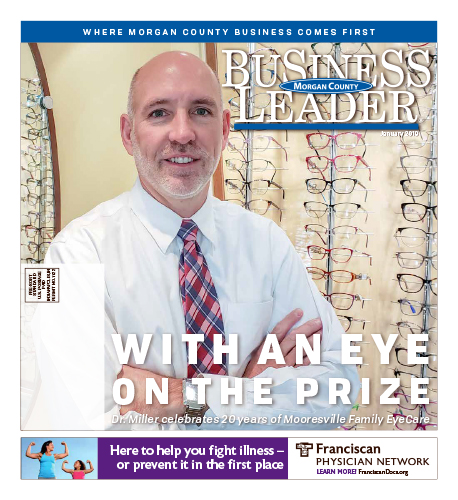 It was 20 years ago, in November 1998, that Michael Miller came to live in Mooresville. He had graduated from the Indiana University School of Optometry in 1991. After several years with the Indiana Eye Clinic in Greenwood, he had decided he wanted a private practice of his own. He began the search for an optometrist who was ready to retire or sell his practice. He learned about Dr. Bill Kirby in Mooresville. Dr. Kirby had about four decades serving the Mooresville community.

Looking at the beginning

Miller grew up in a small town in northern Indiana called Plymouth. His mother had developed early onset macular degeneration and had been legally blind since the age of 28. He understood the challenges visually impaired persons faced on a daily basis. Driving, in particular, was an issue. She needed special permits and could only drive under certain restrictions. Living out in the country made it a more of a hardship. When Miller and his sister earned their driver’s licenses, it was easier for the family.

The personal understanding of the importance of eyesight, along with his interest in science and mathematics, led him to the medical field, particularly relating to the study of sight and sight correction. He was not interested in medical school or actually performing surgery on eyes. With that in mind, and because all of his family, including himself, wore glasses or contacts, his thoughts turned to optometry. “We developed a really good relationship with the family eye doctor,” Miller said. “He was very encouraging and supportive of me going into optometry.”

Given that initial boost, Miller says that a series of little coincidences was proof that God was opening doors to make the process easy for him. The first was that his aptitude for the coursework and exams at IU School of Optometry was very good. He liked the work and it seemed natural to him. Comfortable enough that he was able to complete the coursework required in three years instead of the usual four years.

Looking forward to a private practice

Neither of Miller’s parents were small business owners. His father was a meat cutter. Miller said, “I always wondered why he couldn’t work for himself.” As Miller developed his skills and expertise, he considered business ownership and thought, “If others can, why can’t I?”