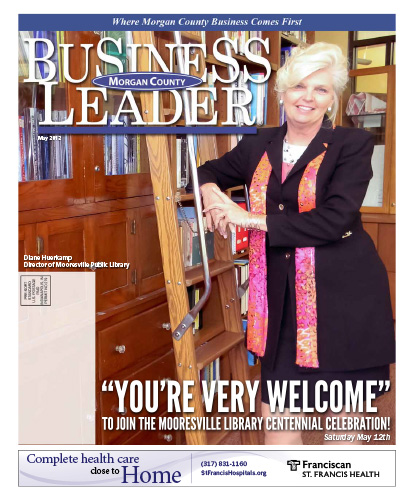 Mooresville Library Director Diane Huerkamp remembers her visits as a little girl to her local library in Irvington, Indiana, on the east side of Indianapolis. “I remember the excitement of
opening those glass doors and entering another world where my imagination could take me anywhere. I remember a distinctive aroma only those who have read books mere inches from their
noses can understand.”

Upon graduating Howe High School, Diane’s career went a number of directions. “I wasn’t thinking of the library as a career. My parents were German immigrants, and we flew back and forth a lot. I loved flying. I thought I wanted to be an airline stewardess. Then my high school sweetheart and I married, he joined the military, and that put those plans on hold while other doors opened. I worked as a veterinary technician; I worked in sales and advertising for a north side newspaper.”
Diane and her husband Bernard eventually moved to Waverly, Indiana. “My parents had built a home out there in 1975, and when they contemplated selling it, my husband and I agreed to buy it.” In 1989, now with school-age children, Diane explained, “Waverly Elementary needed a library aide, so I volunteered there. I also worked with Kindergarteners and emotionally handicapped students. I loved that.”

During this time, she also composed ads for the Mooresville Times for two years. “A similar library assistant position opened up at the Morgan County Public Library, so I worked there from 1997 until 2000. I did not have a degree in library science at the time, but that’s how it started, working three part-time positions.”