EVERYONE NEEDS A GOOD NIGHT’S SLEEP 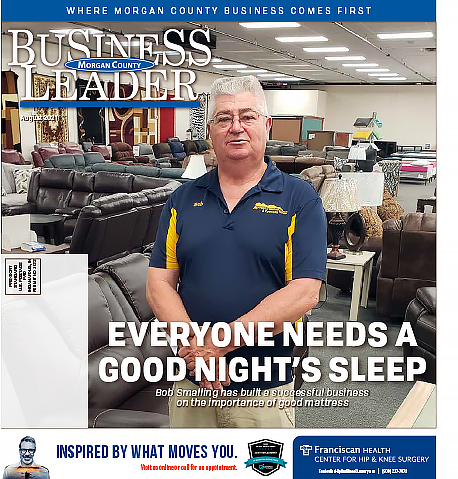 In 1975, Bob Smalling’s family moved from the Eastside of Indianapolis to Mooresville. He enrolled as a sophomore at Mooresville High School. When he graduated, he was not certain of his path.

Smalling started out following in his father’s footsteps as an electrician. “I loved it and made good money,” Smalling said. But he had always wanted to own his own business. “I looked at business owners and I thought they were making a very good living. I had this idea that it was a way to build wealth.”

In 1980, Smalling took the $30,000 he had saved as a single electrician and bought a grocery store. “The grocery business is tough,” Smalling said. “It is seven days a week and we were open from 6 AM to 8 PM every day.” After eight years, Smalling decided that while he was doing well with the store, it was draining him.

He sold it and went to work as a salesman for Ray Skill man. He secured one of eight jobs from a field of more than a hundred. He says sales at the time was a popular career choice and when you like the product you are selling, it is even better. “I believed in the Oldsmobile product,” Smalling said. He spent five years honing his skills as a salesman, learning not just the ins and outs of selling, but how to monitor and measure his efforts. Today, he brings all that knowledge and experience to the store and uses it daily in his business.

But the lure of ownership was strong and in 1993, he left to start an electrical business. “I was always booked,” Smalling said, “but it got harder and harder to collect payments after the job was done.” After a while, he realized that while he wanted to be a business owner, no business could survive taking too many losses. He wanted some sort of retail operation where people paid for the product at the time of purchase.

Finally, in 2001, Smalling found that retail operation when he started selling mattresses in Decatur Township. After several years he decided that he wanted to be in Mooresville because he knew it would be a good market. “There wasn’t a mattress or furniture store, and we found a great location,” Smalling said, “right on the corner of Indiana and Main Street. We had neon lights around the windows and you could see them from just about every direction. I think that Bob Smalling has built a successful business on the importance of good mattress location is part of what made the store successful right from the beginning.”

Right from day one Smalling put an emphasis on giving every customer the personal touch. He employs delivery people who unload the furniture and set it into place in the business or home. Not just that, but deliveries are made on the day and time promised.

He says a customer never carries anything out of the store. Customers are sometimes surprised that they aren’t the ones loading a purchase into a car or truck if they want to take it the day of purchase. “I can’t tell you how many mattresses we carried out the front door on Main Street,” Smalling said with a smile. Likewise, any customer service issues are handled promptly and completely. “It is important to me that customers feel they can count on me.”