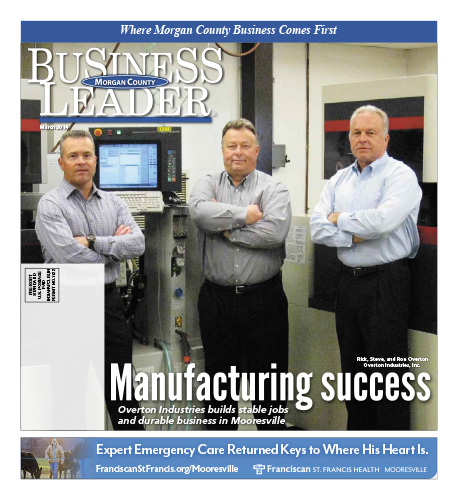 Even when their business grew to supply customers across the globe, Steve Overton and his brothers, Ron and Rick, stay in Central Indiana, Mooresville more specifically. Why is that?
Steve says it’s because of a couple of reasons. He said, “It’s where we live; it is home. The community has been good to us and of our business. It’s a great place to live.” After a breath, added, “We have fantastic people working for us here, too.”

Those two things, the people who work with the Overton brothers and the community, stand out as integral components to what’s important to this company and the owners.

Overton explained that Overton & Sons Tool & Die was originally started by his father, Ruby Overton, in November, 1968 on Bishop Street in Mooresville. By June of 1973 the company had twice outgrown their facility and the business moved to its present day location.

All the boys had, at one time or another, worked in the business, but in 1986 when Rudy died suddenly in an accident, three brothers came together to take over as owners. Their had been working on the floor, not management, and then that the new owners started to see what the people there really meant. Steve said they learned very quickly that you care of your people and they take care of you. You are only good as the people who work here.

“It was hard. We didn’t really know anything about running a business, especially a tool and die business, but you do things because you have to. It took a lot of adjustment. We had about 20 people and we did not lose one single person in that time. They got behind us and supported us,” he said. “If it hadn’t for them, we probably wouldn’t have survived.

And they were determined to keep their father’s business alive. Ron stepped in as president/CEO. Steve had a business degree from the University of Evansville and took over the side. Rick moved into the estimating area. Even though roles were seemingly defined, each brother stepped in and as needed in any role or for any responsibility. Even sister helped the business recruiting new employees.

With the support of employees and each other, Overton Sons Tool & Die grew. “You do it because there is opportunity,” said Steve about expansion. “You take the chance, the risk, hope it turns out.